Home Uncategorized OSU not worried about lack of defensive depth

OSU not worried about lack of defensive depth

Ohio State may be without two starters on the defensive line when they take on Notre Dame in the BattleFrog Fiesta Bowl on New Year’s Day but for some veterans of the Buckeyes’ defense, it doesn’t mean a thing.

“I’m not worried personally,” said redshirt sophomore linebacker Darron Lee. “From where we started at the beginning of the season to where we are now, these guys have gotten a lot of reps and (are) more experienced.”

The seventh-ranked Buckeyes (11-1) will be taking on the eighth-ranked Fighting Irish (10-2) in Glendale, Ariz. at 1 p.m. on Jan. 1 without two defensive starters in senior defensive tackles Adolphus Washington and Tommy Schutt.

Washington was arrested earlier in the month for misdemeanor 1 solicitation and Schutt was ruled out by head coach Urban Meyer with a broken foot.

Defensive coordinator Luke Fickell said that this is something the team has unfortunately tried to expect all year long.

“Not that you’re planning for guys to get hurt (but) that’s what the game is all about,” said Fickell on Monday. “To lose Adolphus is a huge hit. The reality is, all year you’ve been preparing yourself. We take a hit. That presence of having Adolphus and Tommy (as) seniors that have fought themselves through this program, in a lot of ways, their presence is missed more than anything.”

Junior defensive back Vonn Bell said it’s all about next man up.

“It doesn’t really matter, we’ve been training for this all along,” said Bell on Monday. “I trust all those guys, Donovan Munger, Mike Hill, Tracy Sprinkle, Joel Hale. (They) really go get the quarterback and hold them gaps up. I really trust those guys … to get the job done.”

The Ohio State defense will be asked to contain the next man up in quarterback DeShone Kizer, a redshirt freshman from Toledo (Central Catholic) Ohio who wasn’t offered a scholarship to play for the Buckeyes, but has fared very well for the Fighting Irish in moving the football.

Kizer, who took over for another Ohio-bred QB in Malik Zaire – who was injured during their second game of the season this year against Virginia – was never offered by OSU and assuredly is looking forward to some sort of revenge against his hometown team. 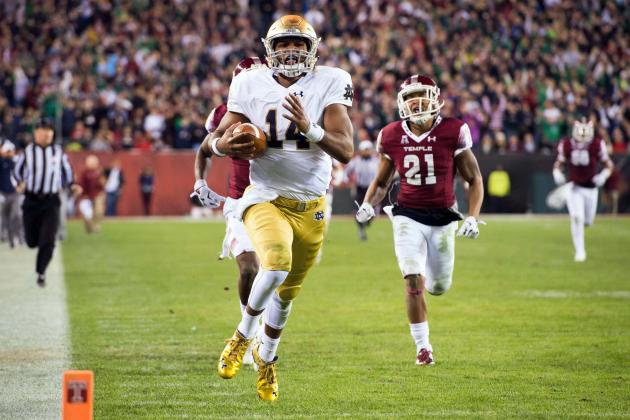 Redshirt freshman quarterback DeShone Kizer runs for a touchdown during their win against Temple.

And the Buckeye defense knows it.

“DeShone is a heck of a quarterback, smart quarterback,” said sophomore linebacker Darron Lee. “He gets that offense going … (and) they’re faster than they have been in previous groups.”

And if there is one thing OSU’s defense has had trouble with this season it is mobile quarterbacks.

“With their offense, they do exactly what they do and they’re not going to try to hide a whole bunch of things,” said senior linebacker Joshua Perry. “The thing for us is to make sure that we’re on alert because he can beat us two ways: he can beat us throwing the ball and he can beat us running the ball. So we have to be (on) for that.”

Kizer is third on the team in rushing yards (499) and second in rushing touchdowns (9).

Is Lee worried about losing two starters in Washington and Schutt up front when trying to contain Kizer or the run?

“No,” simply said the redshirt sophomore linebacker. “The way practices have been going, we’ll be fine.”

Graduate of THE Ohio State University school of journalism as well as the Ohio Media School (formerly the Ohio Center for Broadcasting). Andy has been with Columbus Wired since Feb. 2015 and is the feature writer for Ohio State football and the Memorial Tournament as well as pitching in on Columbus Destoyers coverage. He also hosts his own podcast, The Buckeye Leafcast, which can be found on Youtube, Facebook, Twitter and right here on Columbus Wired.

Buckeyes back to football